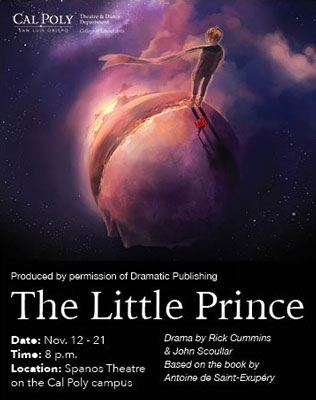 Based on the book by Antoine de Saint-Exupery
​Directed by: Al Schnupp

The Cal Poly Theatre and Dance Department were pleased to present its fall show, THE LITTLE PRINCE.  The play is based upon the enormously popular French novella by Antonie de Saint-Exupéry.  It was first published in 1943 and “is the most-read and most-translated book in the French language.” The stage version is by Rick Cummins and John Scoullar.  When adapting the novella, the composer and lyricist underscored much of the action with music.  The play was presented by permission of Dramatic Publishing.

An aviator crash-lands in the desert.  While struggling to repair his airplane and survive in the harsh climate, he is visited by the Little Prince.  The strange, innocent, mysterious little boy regales the aviator with the tales of his travels - sailing among the stars, visiting fantastical planets and meeting unique characters.  The stories of the Little Prince awakens the lost child in the Aviator, reconnects him to his dreams and helps him survive his ordeal.  Their relationship is tender-hearted, inspiring and heartbreaking.  The landscape in which they find themselves seems to be imbued with magic and light.

The cast was comprised of twelve actors.  Most characters were performed by live actors, however the production also featured five hand-crafted puppets that are articulated by four puppeteers.  The setting was comprised of a vast three-dimensional backdrop that feature planets, interconnected with gears, wheels, belts and mechanical devices.   A stylized vintage airplane was also featured prominently in the design.  The illustrations, drawn by the Aviator, were projected onto a large screen with synchronized drawings by artist Beatriz Pereira.

Performances took place over two weekends: November 12, 13, 14 and November 19, 20, 21. All performances began at 8 pm in Spanos Theatre on the Cal Poly campus.

The performance is sponsored by Cal Poly’s Theatre & Dance Department, the College of Liberal Arts, and the Instructionally Related Activities Program.