“Betty’s Summer Vacation” is an outrageous play and a dark spoof commenting on the media’s obsession with sensationalizing events and its ability to cater to our fascination with notorious behavior. The play explores how people respond to horrific acts — sexual abuse, rape, incest, castration and dismemberment — in disturbingly funny, astonishing and unabashedly truthful ways.

Written by Christopher Durang, the Obie Award-winning play opens when Betty and her friend Trudy rent a seaside cottage that they have to share with a group of unsavory characters.

The cast includes Keith, a strange introvert who carries around a shovel and hatbox; Buck, a sex-crazed hunk; Mr. Vanislaw, a degenerate flasher who gets his thrills from hiding in women’s dressing rooms and exposing himself; and Mrs. Siezmagraff, a raging drunk and widow desperate for male affection who is also trying to forget her ex-husband’s abuse of their daughter, Trudy.

To add to the madness, a group of voices coming from the ceiling suggests that everything the characters say and do is being observed. To avoid boredom at all costs, the voices urge the characters to commit heinous acts.

If you have trouble viewing this slideshow, please view it on Flickr. 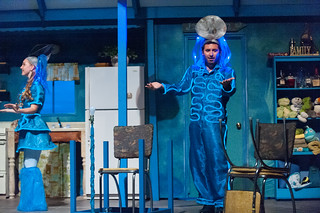